Chilly winters and scorching summers – we’ve all gotten used to the extreme weather in Ohio. But they’re much more bearable when the indoor temperature is a nice constant. For that, you’ve got heating and cooling to thank. It’s hard to imagine a time before climate control, and that’s because none of us remember an era without it. Learn more about this modern advancement and its benefit to our daily lives, including your self storage experience at Storage Rentals of America.

The Happy Medium Between Hot and Cold

With heating and cooling have come many benefits to our well-being – specifically, the diminishing of health risks associated with extreme weather. Heat brings on rashes, as well as dehydration and heat exhaustion, while the cold dries skin and narrows blood vessels. Cold weather also brings the potential for hypothermia: Even long-term exposure to mildly cold weather is enough to cause it, so imagine a harsh Ohio winter with no heater.

The Ohio weather as temperamental as we all know it can be, we’ve equipped several of our facilities to fight our state’s climate extremes. Many of our storage units feature climate control to keep your belongings at a constant, regulated temperature and humidity level. This is important for wooden items – which expand and contract with temperature swings – and other temperature-sensitive items like electronics. Controlled humidity prevents metal from rusting and papers from molding. 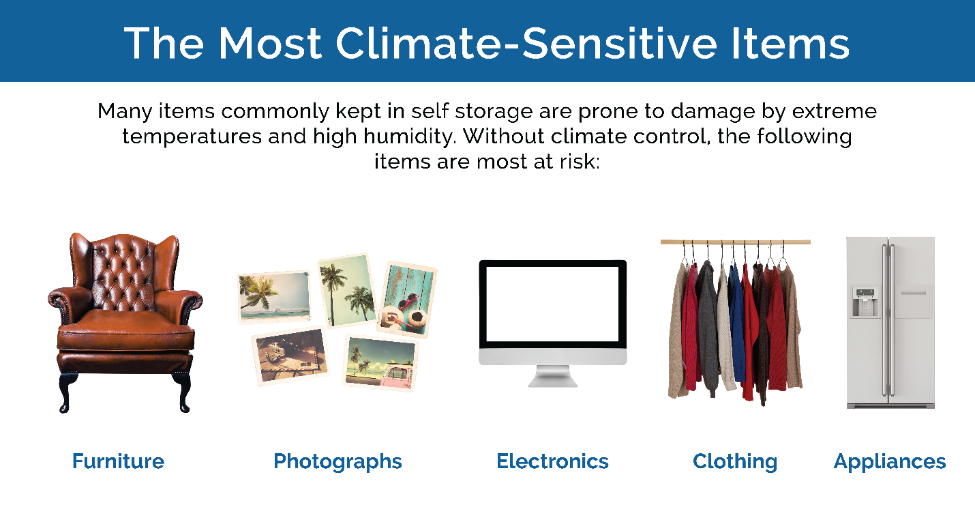 Climate control has drastically reduced the adverse effects of sweltering heat and frigid cold. Now that we know how beneficial it is for both you and your belongings, let’s find out how heating and cooling gave root to the self storage feature we know today.

Developments in Heating and Cooling

Heating: From Fireplace to Furnace

Believe it or not, there was a time when heating didn’t exist. Fireplaces have been around since caveman days, but the earliest evidence of designated heating systems points to 2500 BC in ancient Rome. In fact, the Roman Empire took advantage of many amenities we use today: public toilets, sewage systems, and, of course, central heating. To stay warm, they introduced hypocausts, which transferred hot air from underneath their homes into the rooms above.

Unfortunately, this innovation didn’t last the collapse of ancient Rome. After reverting back to fireplaces for several centuries, central heating finally reemerged around 1200 AD. Stoves and furnaces became regular home features. Then, the Industrial Revolution and invention boom of the 19th and 20th centuries brought many new developments, laying the groundwork for modern heating. 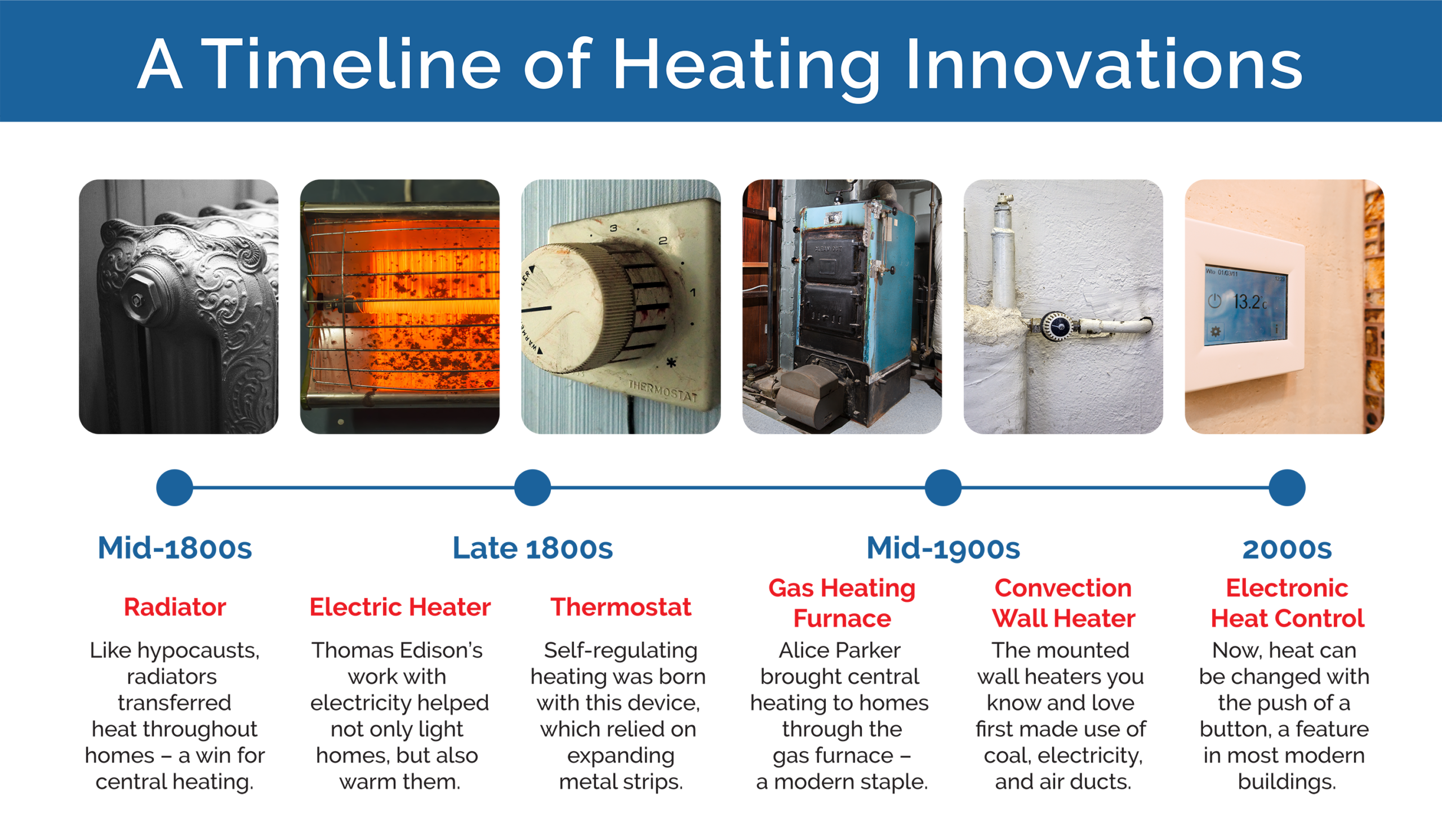 Cooling: Once a Commodity, Now a Necessity

Unlike heating, cooling is a much more recent innovation. But its impact over its hundred years of existence has been massive. There’s a reason the population surged in states like Arizona and Florida across the 20th century. Air conditioning meant the scorching summer temperatures were no longer a deterrent. From the 1960s to the 2000s, the percentage of homes with air conditioning grew from 10 to nearly 90 percent. Nowadays, it’s rare to find a building without it in Ohio.

Before cooling, many people used paper fans, while others simply sweated out the July heatwave. Again, it was the Roman Empire that made the first breakthrough, transporting cold spring water into homes via aqueducts. In 200 AD, Roman Emperor Elagabalus even had snow imported from mountains on the backs of donkeys (an effective but costly method). While heating had its breakthroughs, central cooling didn’t develop until centuries later.

With the goal of regulating heat and humidity, Willis Carrier invented the first air conditioner in 1904. Two years later, the World’s Fair in St. Louis, MO debuted indoor cooling to the masses. Unfortunately, this innovation was only a commodity at first – too big and expensive for home use. But eventually, air conditioners got smaller, leading to central cooling systems. Paired with central heating, we now have access to temperature control year round.

Heating and Cooling Together

As heating and cooling have become a universal necessity, they’ve grown to work in similar fashion – even if they never work simultaneously. The one thing modern heating and cooling both rely on is air flow. With heating systems, air blows into a “heat exchanger,” where it’s warmed and then circulated throughout buildings. In cooling systems, air blows into an “evaporator coil,” and its heat and moisture are absorbed, cooling the air before it’s circulated. 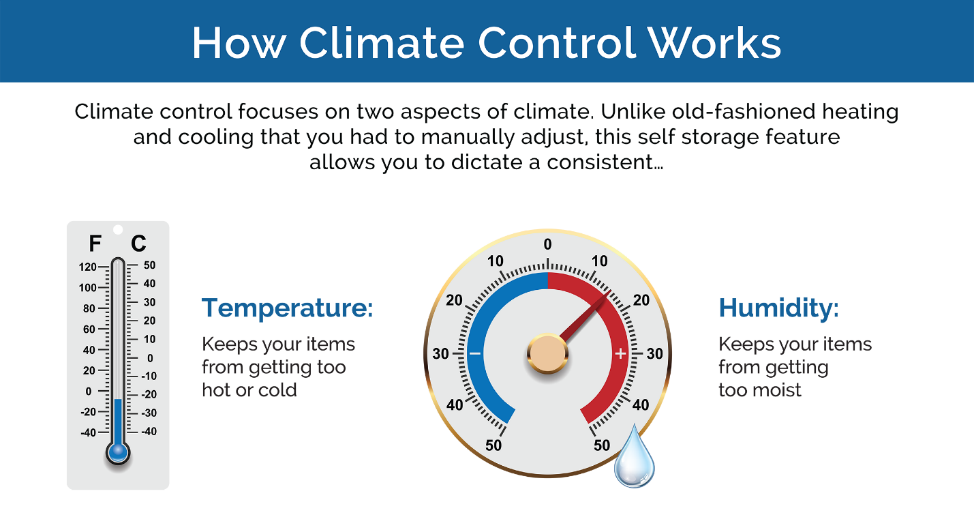 Climate Control for Your Belongings

Our climate controlled self storage combines heating and cooling to constantly keep your belongings at a steady temperature. Your unit won’t ever get above 85 or below 55 Fahrenheit – you’ll be in a sweet spot for sensitive items. You don’t have to worry about moisture, either, as your unit is set at a humidity level typical for indoor comfort. This feature is great for long-term self storage; as the outdoor climate changes throughout the year, your unit stays constant.

Gone are the days of suffering through hot and cold weather. The developments of heating and cooling have brought us comfort and protection, and they’re a huge benefit of storing with us at Storage Rentals of America as well. Our climate control is the solution you need to keep your sensitive items in pristine condition – and keep you cozy while accessing your storage unit. With complete regulation of your unit’s temperature and humidity, concerns over the climate are a thing of the past.

Storage Rentals of America is your convenient self-storage solution. So come into our office or give our storage experts a call at 1-800-457-5678. Our call center is available 7 days a week and can help determine which storage unit size best fits your storage needs.

Other Articles You May Enjoy

Our Most Popular Posts

Top 15 Self Storage Tips From Our Experts

Can You Write Off the Cost of A Storage Unit On Taxes?

8 Things You Should Never Store in an Attic, Garage, or Basement